It should also be known that this sharing with communities is not something that comes to the overt perception of the people involved in it, but is a communication with the quality in which they participate and which reaches out from them.

All the people in heaven are grouped according to spiritual affinities, which are matters of what is good and true in their pattern—the same way in the whole heaven as in each community and in each household. This is why angels who are involved in similar good and true activities recognize each other the way relatives and kindred spirits do on earth—just as though they had known each other from infancy. 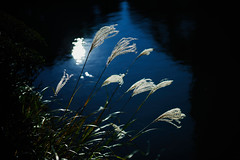