Spirits who during their earthly lives had convinced themselves that they were the sources of the good they did and the truth they believed, or who had claimed these virtues as their own, are not accepted into heaven. This is the belief of all those who place merit in good deeds and claim to be righteous.

Angels avoid them. They regard them as stupid and as thieves—stupid because they are constantly looking at themselves and not at the Divine, and thieves because they take from the Lord what is actually his. They stand in opposition to heaven’s belief that the Lord’s divine nature in angels is what makes heaven.

If people are in heaven or in the church, they are in the Lord and the Lord is in them. This is what the Lord taught when he said, “Abide in me, and I in you; as the branch cannot bear fruit by itself, unless it abides in the vine, neither can you unless you abide in me. I am the vine, you are the branches. Those who abide in me and I in them will bear much fruit; because without me you can do nothing” (John 15:4–7). 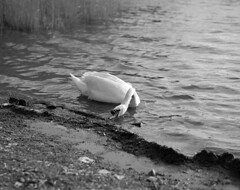